How the makefile in tesstrain-win work

The repository tesseract-ocr/tesstrain on github could implement LSTM training. It is powerful, simple and easy to use. But it only works in Linux. To make the project work in Windows, I made some changes to the makefile and file structure, and the modified project is tesstrain-win.This article mainly records the use of tesstrain-win and its transformation process.

2. The Tesseract4.1 compiled with the source code.

How to compile the source code of Tesseract4.0+ on Windows, Please refer to Tesseract 4.0 + VS2017 + Win10 compilattion strategy

The Down load link of the compiled version 4.1 in this article with training
Tools: https://drive.google.com/file/d/1ALfBsy5C2l9vJkJ_treAqCvcwS7cfoLX/view?usp-sharing.

Python’s Pillow library is used for image processing in makefile, so confirm that the version is successfully installed.

Running makefile under windows requires the help of cygwin, installation method refer to Install Cygwin on Win10 for makefile.

Description of the tesstrain-win files

The tesstrain-win project has two folders, data and old-ocrd, as well as several files, which are roughly structured as shown in the figure:

The ground-truth sample data, unzipd under the current path, can be tested for training, and if you train a custom word library, replace the file with a custom ground truth.

These two files are used in training and there are same regardless of language. They could be downloaded from tesseract-ocr/langdata_lstm. In most cases, no need to change.

old-ocrd: This folder is the predecessor of tesseract-ocr/tesstrain, formerly known as OCR-D/ocrd-train. Its makefile is very different from the existing tesseract-ocr/testrain makefile. It can help us understand how makefile works.

makefile: In order to make it run on windows, it has been modified accordingly.

The other files are the same as tesseract-ocr /tesstrain, which is not described here. 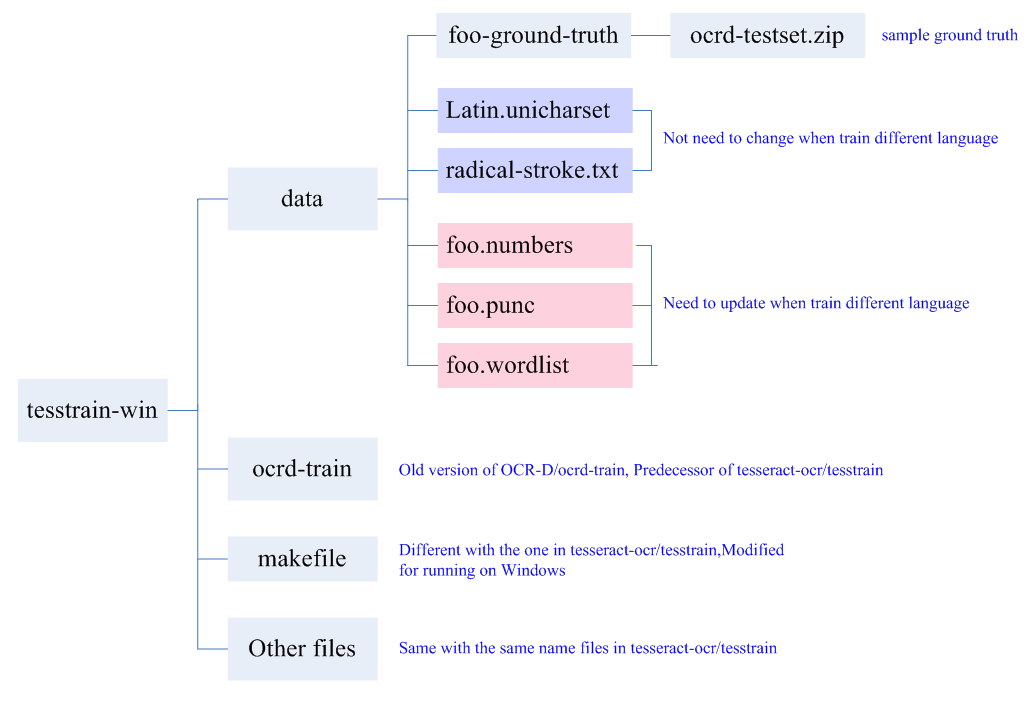 Before you train your own database, it is recommended to test with the ocrd-testset.zip in github. If the oced-testset.zip could be training successfully, it indicates that all the training tools on your computer are ready to use. So let’s start with the example of ocrd-testset.zip to illustrate how to use tesstrain-win. If you encounter an error in training, you can refer to the resolution by going to the “Errors You May Encounter and The Corresponding Solutions” section of this article.

2. Run the command prompt as an administrator and enter the path where tesstrain-win is located.


It is recommended running make training–trace,– trace can output every command in makefile on the command line. it easy to locate the location and cause of the error if an error occurs.

4. when the training completed

If no errors, It takes about 8 hours that ocrd-testset.zip completes training in win10 64-bit 8G PC.

You can name you directly by changing the 11th line in makefile:

Or name it when you run make training.

TRAINING FROM OF SCRATCH:  the START_MODEL in makefile has no value. There is no need to prepare the starter traineddata.

3. Update the foo.numbers/foo.punc/foo.wordlist in the data folder.

The ground-truth consists of an image file and its corresponding text file.

The image must be in TIFF format and the suffix can be .tif/.png/.bin.png/.nrm.png.

The name of the text file is the same as the image name, the content is the text corresponding to the image, and the suffix is named .gt.txt.

Both the image and the corresponding text are required to be a single line of text.

5. Run the command prompt as an administrator and enter the path where tesstrain-win is located.

Errors and the appropriate solutions that you may encounter

You may encounter all kinds of errors during the training traineddata, If there is, come and see that if there are any errors you’ve encountered here:

If you are running tesseract-ocr/tesstrain, you may encounter this error. Modify all of your makefile’s python3 to python.

The python3 execution file is called in the console program with the name python.exe on Win10, and is called pythonw.exe in the GUI program. Please refer to  bash-python3-command-not-found-windows-discord-py.

When you run OCR-D/ocrd-train makefile, the above error may occur. The program like this in the older version of the makefile:

The reference link to solve this error:

How to manage an application to perform aliases on Win10.

3.1 Make sure that the user variables–>Path,

the [……\AppData\Local\Programs\Python\Python36\] is above the [%USERPROFILE%\AppData\Local\Microsoft\WindowsApps], refer to the following image: 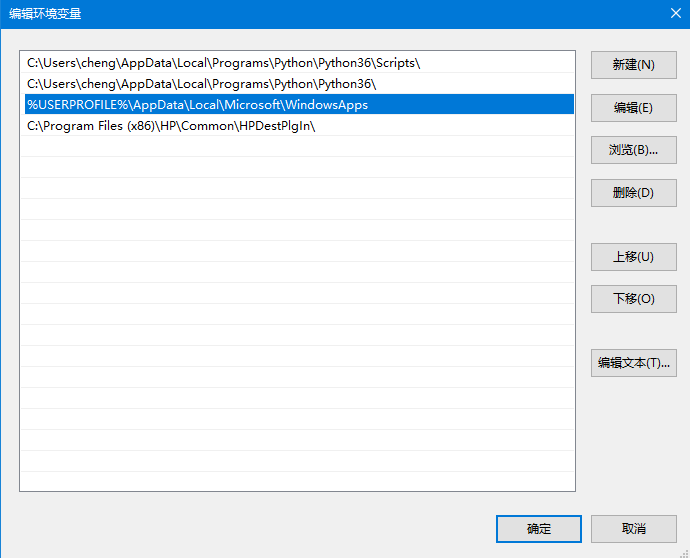 Right-click on the Start menu–>setting–>Application–>Application and functions–> App execution aliases, turn off python.exe and python 3.exe, as shown in the following image: 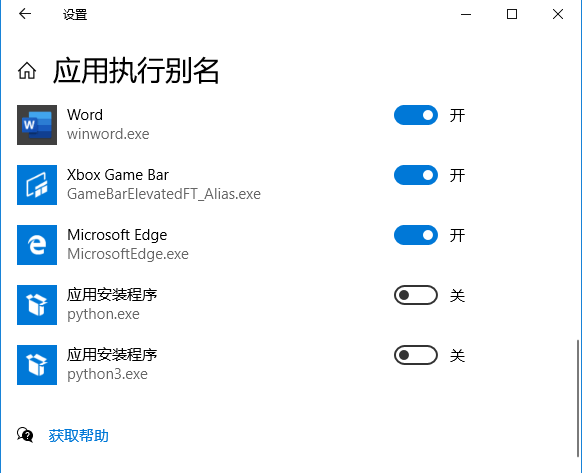 Some computers only need to do as 3.1, some need 3.1 and 3.2 simultaneous. My computer needs two steps at the same time.

Please refer to Install Cygwin on Win10 for makefile.com to confirm that wget, bc is installed.

5.Failed to load any lstm-specific dictionaries for lang…

This error does not occur during training with tesseract-ocr/tesstrain, and It could work normally when the traineddata completed. But there will report a warning.

This error relates to three files with the suffix . wordlist/.numberss/.punc in the data folder.

In tesseract-ocr/tesstrain, the default path for the three files above is $ (OUTPUT_DIR)=data/$(MODEL_NAME), and all the files under this path are automatically generated during training.

If the START_MODEL in makefile has no value, the makefile does not generate any related files under the path;

If the START_MODEL has value, the following statement in makefile is executed:

The statement breaks down the traineddata into several files such as foo.lstm-number-dawg, foo.lstm-punc-dawg, foo.lstm-word-dawg, etc. But what is needed for training is .wordlist/.numbers/.punc files. Therefore, if you train with tesseract-ocr/testrain, It will report the warning when you call the traineddata trained by yourself.

The makefile in tesstrain-win has not been fixed on this issue, using another solution: modify the path of the relevant variable, prepare the .wordlist/.numbers/punc file under the corresponding path, and do not have this warning when called after training with tesstrain-win.

If you want to train with tesseract-ocr/tesstrain and want to solve this problem, you can search for WORDLIST_FILE/NUMBERS_FILE/PUNC_FILE in makefile, modify them refer to the makefile in tesstrain-win.

If the START_MODEL in makefile has a value, the following statement is executed:

If you trained with the compiled tesseract4.1, the following error may occur:

The reason is that the compiled tesseract4.1 has no merge-unicharsets, the specific reason and solution is not known now.

The merge_unicharsets function is to combine the exsiting character set with the new characters added at the Fine_tune. To change the statement to the following statement, which can complete the training execution without the merge_unicharsets command, and the final word library effect may differ.

This article ends, thank you for reading and welcome to follow.